-A particularly common decorative ornament is the head of Medusa.

It can be executed in several ways: in stone, wood and iron and often it is depicted on a shield but occasionally I also encounter it without this background. As an independent ornament it can be in the form of a sculpture or a bas relief carving.
Who is Medusa then?
According to Greek mythology, Medusa is a daughter of the sea gods Phorcys and his sister Ceto. Together with her sisters Stheno and Euryale they were depicted as women with tusks, hands of bronze, golden wings and snakes instead of hair and were called the gorgonians. Medusa was the only one who was mortal.

Originally Medusa was a beautiful girl until she was caught by Pallas Athens in one of her temples while there Medusa made love to Poseidon and thus disconsecrated the temple. According to Ovid, Medusa was raped by Poseidon. Nevertheless, Pallas Athens became so angry that she turned Medusa into a monster with snakes like hair, tusks of a pig, glowing eyes and a tongue that stuck out of the mouth. A cosmetic metamorphosis that made the sight of Medusa so terrible that everyone who looked at her turned into stone.

Medusa was finally beheaded by the hero Perseus, who had received some help from Athens, and as a thank you Perseus offered her the head of Medusa and Athens placed the head on her shield in order to petrify enemies with it.
The shepherd's hour with Poseidon was not without consequences and when Peseus cut off the head of Medusa, Medusa gave birth to the winged horse Pegasus together with the giant Chrysaor.
Because of the frightening sight of Medusa's head, this motif is often used as an ornament on doors and facades of buildings or in the possession of a king.

Here are some examples of this decorative ornament
that I've photographed for many years. 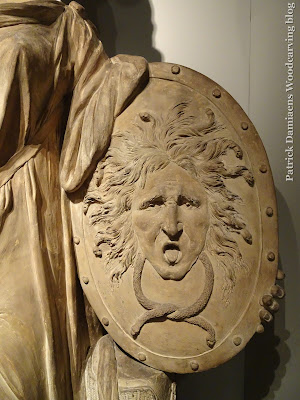