Did ZARA HOME commit plagiarism? | Inditex | A Candle from Zara Home | A constatation in some branches of ZARA HOME

THE NEW STYLE ACCORDING TO ZARA


“Taken from the internet”

Maaseik (Belgium)– Last year, Zara Home, the furniture store which is part of the world-renowned retail fashion chain INDITEX (Better know as ZARA), possibly sold thousands of candles bearing a decoration that very closely resembles a work of art by the hand of Patrick Damiaens, a woodcarver from Maaseik. “We just happened to stumble upon it. The designers at Zara, most likely just copied my work from the internet”, Damiaens says. “Without even asking! At the very least, I demand an apology.”

Patrick Damiaens creates coats of arms and ornaments for customers around the world. He’s a well-known and respected name in the world of heraldic art, and is considered one of the greats. On 27 December 2014 he received a phone call from a French admirer asking him if he knew about Zara Home using one of his designs as decoration for a line of candles.

Damiaens headed over to the Antwerp branch of Zara Home to take a closer look at this infamous candle. “There’s no doubt about it”, he says. “The candle unmistakably bears the coat of arms that I had designed and carved for a Dutch customer back in 2012. Mind you, it isn’t an exact copy. It’s virtually impossible to recreate in candle wax. It is, however, almost identical.”

“For an outsider, all coats of arms may look alike, but because of the different combinations of numbers and letters, helmets, crests and necklaces etc. there are literally tens of millions of possible variations. It’s easier to win Euromillions than it is to accidentally create the same design.”


Patrick is in the habit of posting pictures of his work on the internet. The designers at Zara Home were probably scouring the internet for some inspiration for a design to put on the candle and simply decided to copy/paste one of his designs. “The depiction on the candle is without a shred of doubt based on my drawing, which was later used by Patrick to create a woodcarving.
But nobody asked for my permission either”, heraldic artist Nagtegaal confirms. “One might think that copyright doesn’t apply to coats of arms, because they’re so old”, Odink, the owner of the copied coat of arms, says. “My family’s original coat of arms dates back to the seventeenth century.

But this is a contemporary version, completely authentic. I commissioned Damiaens to create it two years ago. As a customer, I was actively involved in the creation process and it was all quite expensive and rather time-consuming to have it made and registered as well. How on earth is it possible for a multinational to use it for commercial purposes without my permission? This just isn’t right.”


In the beginning of January, Odink and Damiaens sent a registered letter to Inditex, the parent company of Zara Home. “Believe it or not”, Patrick says, “but one day after our letters had arrived, all candles were removed from Zara Home websites across the world. Very impressive.”


Zara Home claimed, though, that one thing had nothing to do with the other. Nevertheless, all candles were removed from all Belgian and Dutch stores as well. “Just to avoid any discussion with you”, Zara Home explained in a letter to Patrick Damiaens.

“Zara Home categorically denies having made an error”, Patrick says. “They claim my work isn’t copyright protected and furthermore maintain that they never used my version of the coat of arms. They somehow, unwittingly, managed to create an exact copy. They must be joking!”


Seeing as the candle was sold for 16 euros and the production costs amount to only a few euros at the most, Zara Home, with its hundreds of shops in dozens of countries around the world and a web shop that caters globally on top of that, probably managed to squeeze quite a bit of money out of the whole deal.

“How much? We can only guess”, Patrick says. “But Zara’s money doesn’t interest me. All I want from them is an apology or an admission of guilt. To use someone else’s design to make some money, how distasteful is that?”


One day after Patrick Damiaens had contacted Zara Home, all designs were removed from websites across the globe. At the same time all candles were taken out of stores worldwide. “But ten days after we confronted Zara Home, we still hadn’t received an answer.
Even though we called and e-mailed the company at least twice a day, among other things to ask Zara Home if they were aware they were plagiarizing, adding the Flemish saying ‘Zwijgen is toestemmen’ (silence gives consent).” 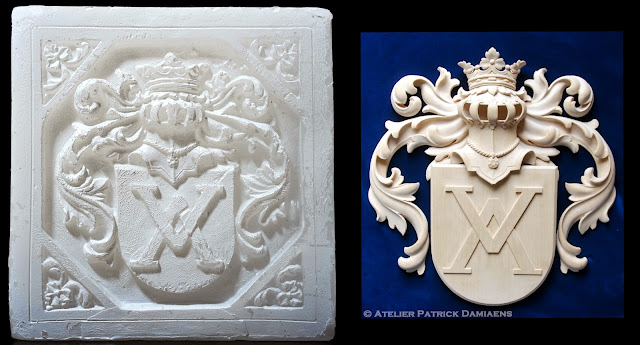 
The conflict between Patrick Damiaens and Zara Home is reminiscent of the case of Luc Tuymans, earlier this year. The famous Belgian painter based his painting ‘A Belgian Politician’ on a picture of Jean-Marie Dedecker taken by Katrijn Van Giel, photographer for De Standaard. The county court in Antwerp decided that the world-renowned artist had committed plagiarism and ordered him to pay damages in the amount of 500.000 euros per reproduction. Tuymans decided to lodge an appeal against this decision.

Katrijn van Giel was defended by Antwerp barrister Dieter Delarue, who is slightly disinclined to utter the word plagiarism, “because this word is nowhere to be found in copyright law”, Delarue argues. “What we can say is that placing the design on the candle and the subsequent sale of the candle constitutes copyright infringement. After all, the design on the candle is a reproduction or at the very least an adaptation of the original drawing of the woodcarving.
In order to make such a reproduction or adaptation, it is mandatory to ask for prior permission from the artist who created the original artwork. The fact is, the latter has the exclusive right to reproduce, adapt, exhibit and distribute through sale or otherwise his or her own work. If one does not ask for permission before reproduction, we can speak of a violation of the artist’s rights.”

Arguably, there is little to no doubt that the artists of the original drawing/woodcarving can call Zara to account for their actions. Delarue doesn’t give a definite answer when it comes to a possible compensation. “The nature and size of the claim depend on the client. If a client wishes to be financially compensated, reasonable royalties, i.e. the compensation one would have received if agreements had been made, are taken into account for this type of violation.”

Please feel free to leave a comment on our FB page