A carved challenge trophy  in Wood

In early times contests were all about club spirit. Contestants were proud to compete in an archery tournament and win it on behalf of their club. Nowadays, due to the globalization of our society, our sport leans more towards individual performances. Individual interests supersede team interests. To bring about a change in this respect, Concordia Peer has commissioned the design and creation of a valuable challenge trophy. It is our wish to see clubs compete for this trophy with team spirit in mind.

History
It was in Peer (in the Belgian province of Limburg) in the “Groene Woud” Inn that, on 12 April 1876, an agreement was reached to found an archers’ guild.

The guild was named “Concordia”, which is the Latin word for “harmony”. Archers would stand at a distance of 28 m and would use bows with wooden materials that were glued together in combination with wooden arrows to shoot at thatched straw mats. This type of bow can still be admired at our present club.


Around 1880, the tradition of an annual fair was started, in which archers would compete for prizes for a total amount of 20 BEF (app. half a euro).

At the beginning of the 20th century the guild counted approximately 25 members; a number that lasted up to World War I. Yet, even throughout the war, the guild remained active.


1926: golden jubilee (50th anniversary). During this year, His Majesty the King granted the guild the right to bear the title of “Royal Society”.


Concordia flourished. The years went by, but not without both good and bad tidings. Due to the mobilization, it was decided during the first meeting of 1939 to postpone all festivities. Not long after, the war broke out and there wasn’t much to celebrate anyway.

During the war years, between 1940 and 1944, certain expenses were made for the Holy Masses in name of Saint Sebastian and for the insurance of the archery targets as well as the banner.


June 1945: after 5 long years of war and forced suspension, the first signs of Concordia’s revival became noticeable.
On 10 June 1945, a first meeting was held in Café Martens Jan on the market square, no. 16 (currently "Wapen van Peer" (Coat of arms of Peer). It was decided to move the archery targets to this location. The Sunday thereafter, archery practice could commence. The number of members grew to 25 again. 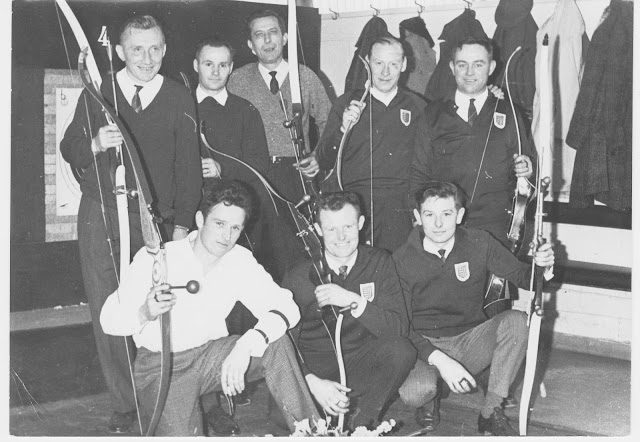 Next, the club started to gain more and more recognition and soon became a nationally renowned club, known even beyond the Belgian borders.


1973: The clubhouse was named "Concordia". The club was now housed in a smashing accommodation. Owing to this, the number of members increased and the club could pride itself on having a strong group, counting 34 members. 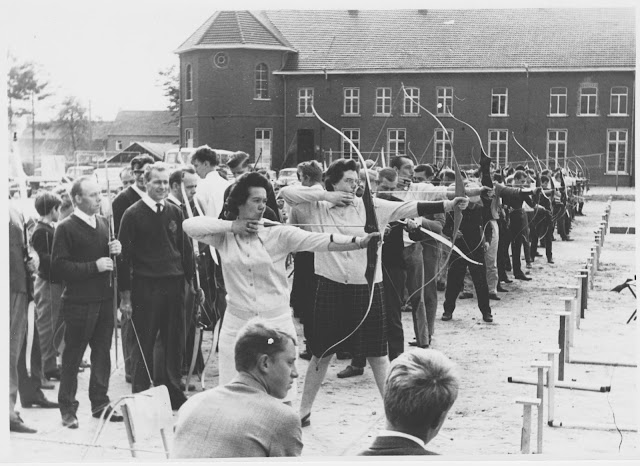 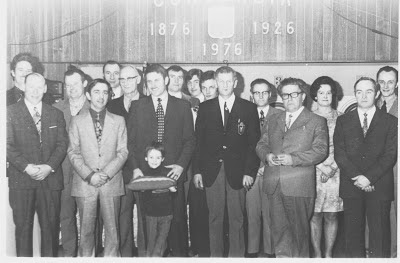 In 1976, we celebrated our 100th anniversary. During the festivities, a commemorative plaque was revealed by Senator-Mayor Dupont.


6 July 1989: the club was moved to a new clubhouse, which, in 1990, was embellished by a brick wall. The building was officially inaugurated by Minister – Mayor Kelchtermans.


At present, the Royal Archers Society Concordia, which in the meantime has become a non-profit organization, is the proud owner of a beautiful clubhouse situated in the Deusterstraat. The club wishes to express its thanks to the town council, the committee and all of our members. Proof of the fact that the club has always done quite well in the past are the many trophies and antique medals, which can be admired at the club. 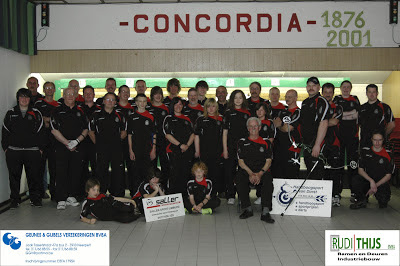 Our club now counts approximately 40 members. We have competitive archers as well as amateurs in our ranks. Our members compete in both national and international tournaments. The competitions in which they participate are: fita, 25 meter, 3p and 1p, field, 3D and indoor. In the past, there were certain members of our club, who even competed in European and World Championships. In 2007, Levi Jannis managed to win the European title in the junior category at the European Championships in Vila Real (Portugal)

Location of the City of Peer: Peer is located in the north of the Belgian province of Limburg. It is known for its Belgian Rhythm & Blues Festival, the indoor ski slope and of course Center Parcs Erperheide. 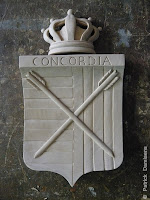 The design is a challenge trophy in the form of a pear. It’s made to look as if someone took a huge bite out of the pear, in which the Club shield is incorporated. The pear leaf was carved separately and the whole was placed on a pedestal made of oak. Every year, the name of the winner will be engraved on a metal plate on the pedestal of the challenge trophy in commemoration of their victory. 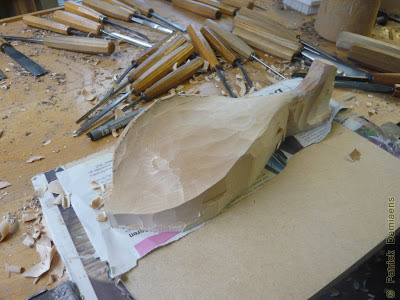 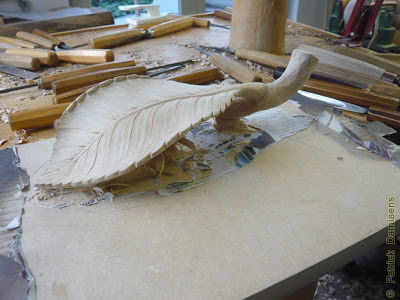 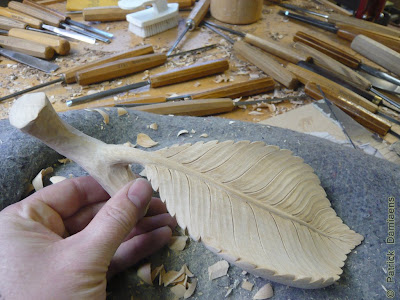 Carving of the Heraldic Club Shield

This shield bears a combination of the official heraldic coat of arms of the City of Peer and 2 crossed arrows. 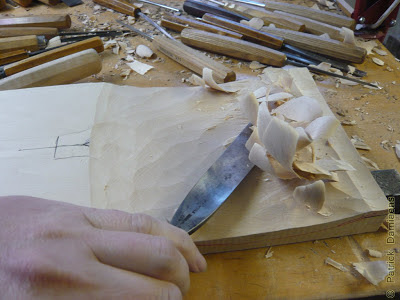 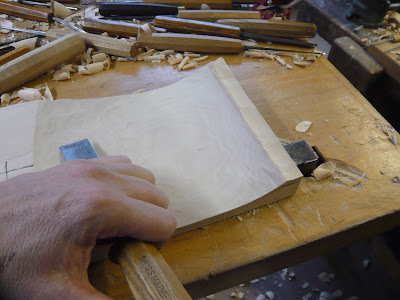 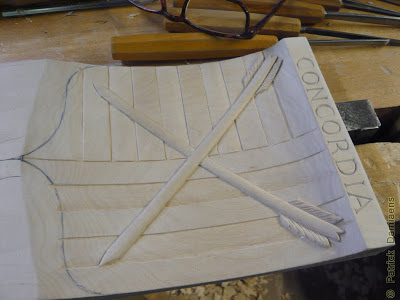 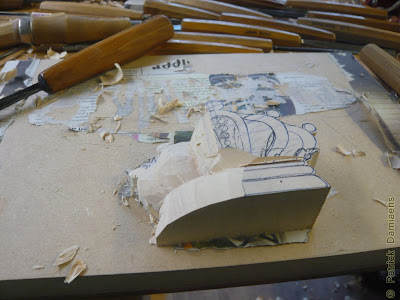 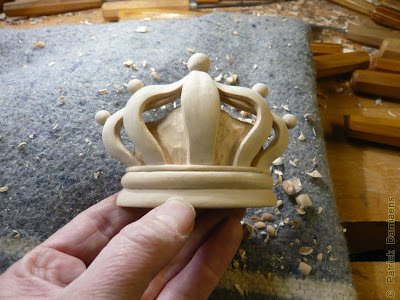 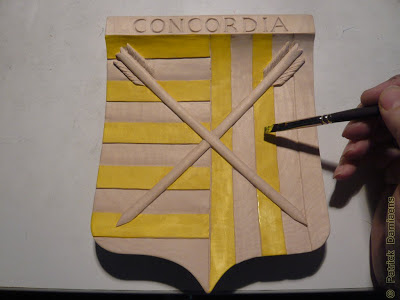